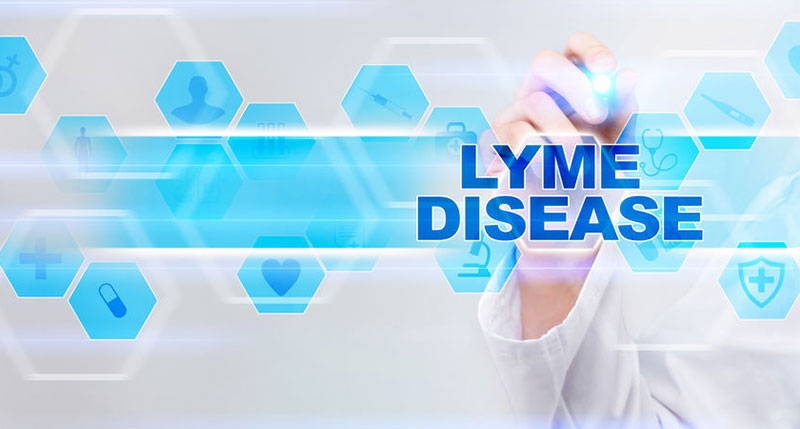 Ticks are tiny arachnids, 3 mm to 5 mm in length—poppy seed size to sesame seed size–that feed on the blood of mammals and birds. Many species transmit diseases to both people and animals due to the tick’s lifecycle of feeding on three main hosts—one each in nymph, larval and adult life stages.

Ticks that bite humans are present in all 48 of the contiguous United States. Late spring, summer and early fall are when most tick bites occur.

Because ticks attach to various host animals and feed on their blood, ticks harbor multiple bacteria and infectious diseases. These blood-borne bacteria are easily spread from the first host – often a rodent or bird― to the second host, a dog or deer, from which the tick may pick up additional microorganisms. All blood-borne bacteria from the tick’s first two hosts are transmitted to its final host, which is sometimes a human.

One unique type of disease-causing bacteria that ticks carry is called a spirochete. It’s shaped like a Slinky and can curl in on itself, forming a protective ball of dormancy to survive when conditions are unfavorable―such as when antibiotic treatment is attempting to kill it. When conditions change, the spirochete bacterium unfurls itself and continues ravaging its host—sometimes months or even years after dormancy.

The most common tick-borne infection globally is caused by a spirochete bacterium known as Borrelia. The black-legged tick carries it in the US. In other countries, infection with this bacteria is called borreliosis.

However, the illness was first identified in the US near Lyme, Connecticut in 1977. This discovery occurred when a group of teenagers complained about aching joints after experiencing similar bulls-eye skin rashes seasonally. A parent who worked in Public Health brought together investigators that determined the condition was due to seasonal surges in tick bites. The studies, mostly done in Lyme, Connecticut, pinned the name “Lyme Disease.”

The various bacteria transmitted from ticks to humans are difficult to diagnose. Because ticks bite with an anesthetic, you can’t feel them and may be unaware that a tick has bitten you. The wide array of tick-borne illness symptoms makes diagnosis even more challenging.

One surefire way to confirm Lyme Disease is if you get a skin rash after a tick bite, whether it’s a “bulls-eye” rash or solid red or pink in presentation.

A bulls-eye rash itself is diagnostic of Lyme Disease. That means no further testing is needed. If you develop such a rash, take photos and document its progression (it will likely enlarge over time)―and seek medical attention. Common misdiagnoses are fungal infections and spider bites, so photograph and document well in case you need a second opinion.

However, not all tick bites result in a bulls-eye rash, and without the rash, tick-borne illnesses can be difficult to diagnose.

Another diagnostic is a blood test for antibodies that indicate your body has encountered the bacteria. However, since some people suffering from tick-borne illness have compromised immune systems that may not be capable of effectively producing antibodies against the bacterium, such tests fail 40% to 70% of the time.

Adding to the diagnosis difficulty, the incubation period for tick-borne illness varies. Symptoms may appear from four weeks up to several months after the bite.

Because it’s so challenging to identify, tick-borne illness can go undiagnosed for years, during which time the spirochetes reproduce readily and attack various systems of the host. In addition, there may be more than one tick-borne infection present, which complicates the diagnosis and treatment and can mean a multitude of symptoms that don’t align with a single diagnosis.

“I presented with immune weakness and autoimmunity, which affected my hormones, gut and nervous system. After two years of illness, I was tested for Lyme Disease,” said Krista Hewlett Keegan, a neuroscientist who left medical school due to her disability with undiagnosed Lyme Disease.  “My initial Lyme test wasn’t positive, so the bacteria spread for several more years and my symptoms kept getting worse.”

As with many diseases, the sooner you treat tick-borne bacterial infections, the better. If someone has a classic bulls-eye rash and is diagnosed early, the antibiotic doxycycline, given in a long course over four to six weeks, may cure the disease effectively.

For infections that linger undiagnosed for months or years, treatment takes longer and becomes much more comprehensive due to complications.

For example, adults experiencing muscle aches or leaky gut symptoms who were treated briefly for Lyme Disease in childhood may still have an active tick-borne infection which went dormant in the presence of antibiotics but has since re-emerged. Many such people may become labeled with Fibromyalgia or Chronic Fatigue Syndrome later in life.

There are conflicting standards of care for the treatment of Lyme Disease cases where a faulty negative diagnostic test is suspected.

The International Lyme and Associated Disease Society (ILADS) also has a recognized standard of care for tick-borne illness. ILADS-trained clinicians recognize that Lyme and its related co-infections can be difficult to diagnose, and can go dormant when antibiotics are present.

“Lyme-literate” clinicians who follow the ILADS standard of care prescribe multiple rounds of antibiotic treatment spaced apart over several years to target hidden reservoirs of dormant bacteria that re-emerge after each round of antibiotics, with the ultimate goal of eradicating the infection from the body.

In addition, integrative medical practices may be incorporated into treatment of long-term tick-borne infection, including full bodily support for cellular detoxification, liver support, a clean diet, herbal antimicrobials, and botanicals that target the organisms in their hiding places.

Suspect you or a loved one may have borreliosis? Visit the ILADS frequently asked questions page for more information.